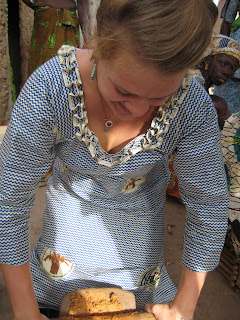 Making peanut butter to use in our sauce 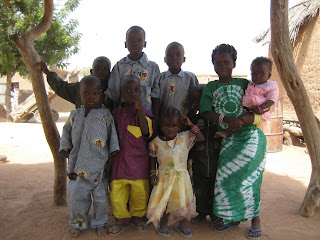 All the kids from my compound in their new Christmas clothes 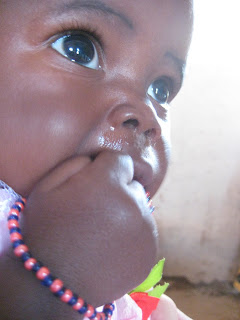 Look at that sweet baby :) 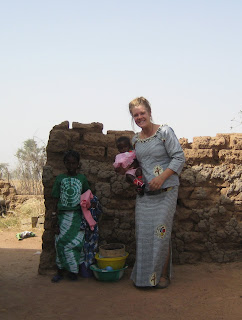 Batuma, Christine and I outside her house before we went to church
Posted by Jennifer at 11:00 AM 2 comments

Ride on the "Bamako Express"; it was anything but. 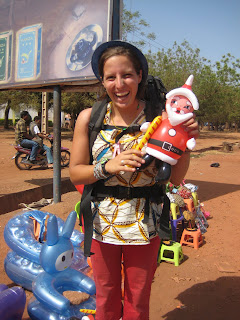 Joelle showing off Christmas decorations we found on the side of the road in Bamako :)

Discharged from the Peace Corps medical unit in Bamako with antibiotics and advice to keep brushing and flossing (I had a tooth situation), I headed to the nearest gare to catch an afternoon bus to San. Bamako can be overwhelming and going to the bus station is no exception. Men rush at taxis shouting station names whose buses are leaving "Sisan, sisan!", 'now, now', and they quickly escort you and your bag to the ticket seller before you have time to think twice. At least that's what happened to me (and others after I shared my story with fellow passengers). But after the painfully long bus ride I just endured I'll be firmer next time and only go to the bus station I know is best. Here's a time line of how I spent the last 24 hours and a great example of how patience and a good book and knitting needles can make anything OK.

So, what should have taken 8 hours (in a Mali bus on a good day, but is really 6 hours in a car going non-stop) took me almost 24. There were many times where I said to myself, Jennifer, what were you thinking when you bought this ticket? But I wasn't alone! There was a bus full of Malians thinking the same thing right along with me. While I don't like to generalize, even in stressful situations I've found that Malians have proven to take things in stride. Not that folks weren't upset about the constant setbacks but there really wasn't much we could do unless we wanted to wait on the side of the road and hope another bus came by. So instead, I tried to smile at my new bus friends as much as I could and it really made the journey that much better. I also befriended a precious little 8 year old named Batuma. She insisted on sitting next to me after we got acquainted when the first tire popped and then she fell asleep on my shoulder as the bus lulled us into a stilted slumber.

Coming back to San really felt like coming "home", especially after such a tiring journey. I took comfort in the familiarity of the boys selling bread by the station and stopping in to pick up packages from Miriam at the post office. Vincent, my tailor, had finished two outfits for me and they fit perfectly (pictures to come!) which put a smile on my face and his. Then, I stopped to have a soda at one of the "boutigi's" and lamented about my journey with Moulie who owns the store. He shared with me one of his own horror travel stories which made my experience feel less singular. Finally, what put the biggest smile on my face and laugh on my lips was the gift waiting for me back at the volunteer house. I started to tell my bus story to two of the other volunteers in the house when Geoffrey, the guard, (since volunteers aren't always at the house, Peace Corps hires three rotating guards to always be there) gave me a present wrapped in cellophane that said "Best wishes!" and was tied with ribbon. I opened it and found a bouquet of fake flowers and baby's breath from one of his friends who hangs outside with him. His friend is perhaps pushing 60 (nothing against older men, but a little out of my range) so the gesture really made my day more than concerned me (as it would if a younger guy gave them to me).

While I'm still rubbing my eyes with sleepiness and cursing the "Bamako Express" for being more like the "Bamako Broke", today (and yesterday) prove to me that I (and Malians) smile a lot more than frown and that's what matters most.
Posted by Jennifer at 9:34 AM 1 comments

These are a few of my favorite things...

As the Christmas and holiday season come upon us, I thought I'd post some of the things that make me happiest here in Mali. Not pictured are the other Peace Corps volunteers with whom I've spent countless hours processing my experiences here, my lovely family and friends who've sent emails, letters and treats making me feel special, Skype, the list goes on. 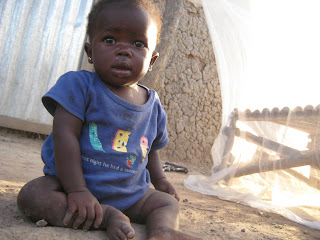 Christine is a surefire way to brighten any day 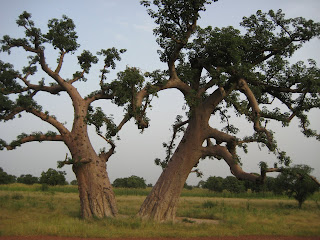 I pass these two (and many other) trees on my bike ride into San each week and whenever I see them I think they look like two friends laughing together. 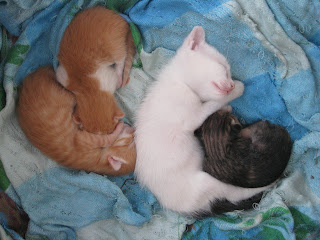 My cat, Caya, had kittens. While I'm not wild about having all the cats in my bed, they can be pretty cute.
Posted by Jennifer at 12:29 AM 1 comments

And we have a fence! 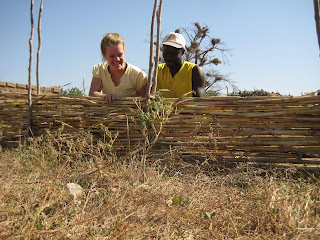 Yes, I even take timed pictures in Mali! 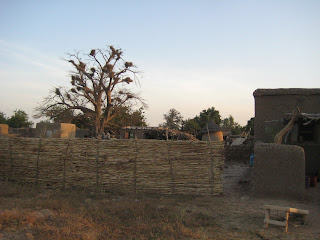 One thing I'm really excited about getting started is my garden. Esayi eyes me with a questioning look whenever I pick up gardening equipment like perhaps I'm holding it for the first time. While it's true I don't know loads about gardening, I've been doing my research and I'm also an eager learner and looking forward to all that Esayi is going to teach me. He came over this past week (well, just walked around my house really, since his house is just behind mine) and we got started building a fence to box in where my garden will be. Esayi did most of the work but let me pretend I was helping by letting me dig a few holes and weave some of the millet stalks. It's definitely going to be a hurdle to convince men that I can do any sort of labor. I get pretty frustrated when anyone tells me I'm not able to do something and my stubborn side comes up so I'm working on that. Fortunately Esayi, though quick to encourage me to rest, is also quick to see that I really want to help when he does manual labor (especially when I barely break a sweat doing it) so it's just a matter of persistence.
Annie wants to plant onions in the garden and I have seeds for watermelons, cucumbers, tomatos, carrots, beans and flowers.

Harvest is slowly coming to a close in my village (and around Mali). This past week saw lots of carts filled with millet being carted in from the fields to store in mud structures like the one seen here. 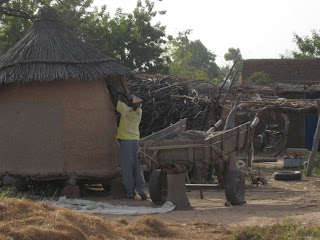 Posted by Jennifer at 5:38 AM 2 comments

A little more about me...

Jennifer
I'm an international education professional and student, writer, photographer and budding environmentalist. I'm sure I'd love to hear from you at jennifermorgandavis[at]gmail[dot]com!

Jennifer in Mali delivered to your mailbox